We have split the search criteria into 3 distinct areas to make it easy to search the database. You can use any combination of the search fields below to find exactly what you are looking for. To see more non specific releases just leave the search fields blank.
We have included a detailed explanation below of the search fields as well as a help system throughout the page to aid you in your searches. To get specific help click on any of red question marks

After entering in the search criteria your results will be shown in a new table where you can get more detailed information pertaining to the specific releases. You may also elect to take the data into excel for further analysis by using the EXCEL DOWNLOAD button located at the bottom of the page.

Target pest: Scientific name of the target agent (pest), including synonyms of the agent that are used in the literature on its use in biocontrol.

Release type:The database consists of 2 parts: released parasitoids and predatory insects or mites.
You have the option of searching:
1- By Parasitoid
2- By Predator
3- Both (leave them both checked )

Natural enemy: Scientific name of the natual enemy including any synonyms that have been used in the literature.

Genus: The genus of the biocontrol agent.

Family: The family of the biocontrol agent.

Place released: Select the country or place of a release. Primary geographic units include:


Generally, no attempts are made to track state-by-state releases within the USA.
Some releases in California are tracked separately in addition to releases in the eastern USA because California is a distinct ecoregion with a strong history of biological control activity.

Year released:Enter the 4 digit year of the release you are searching for. To search for a range of years, enter both a min and max year span.
* Generally, only first releases of a new species are recorded. Second attempts to release a species that follow an earlier failed attempt are tracked in some cases.
**Releases made before 1985 are not included in this catalog.

Enemy Origin:The country or region of origination for the released biocontrol agent is given if it could be determined. When the release material was not obtained directly from the agent's native range, the countries or regions from where it was obtained are given, preceded by "via". For example, "from Thailand via California for release in Mexico" indicates a species originally from Thailand was released in California and then subsequently collected in California for release in Mexico.

Host Specificity Level:The taxonomic level listed is the smallest taxonomic unit that encompasses all known hosts or prey of the agent. This does not imply that all species within that taxonomic unit are hosts, but rather that it contains all the known hosts, and therefore likely contains the host range. In general, the classification levels available for use in characterization of host specificity of agents are

References:You can search by specific references by typing in the name directly. All references used in any aspect of the catalog, are included in this list. 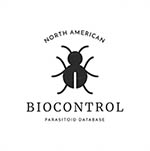